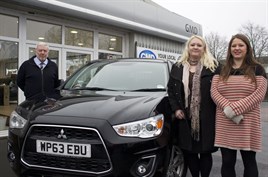 GMD Car Sales has taken on the Mitsubishi franchise in Durham and will build a new showroom which will be completed by June.

GMD Mitsubishi is already operating the franchise from its existing site on Finchdale Road while the dealership undergoes renovations for the new showroom.

Family-run business GMD Car Sales, which was established in 1989 and has been at Finchale Road since 2002. The business also holds the Fiat franchise and has the aftersales franchise for Subaru, Chrysler and Jeep.

Acquiring the new franchise also means GMD will be taking on new staff, in sales and aftersales.

GMD joins the Mitsubishi network as it looks to expand in the UK and continue to increase volumes after recovering registrations in 2013 by 38%.