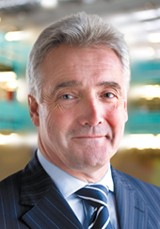 Former Lookers chief executive Peter Jones has been officially recognised for his outstanding contribution to the growth and success of the group at a ceremony held by the company.

At the Lookers’ annual Guild of Excellence Awards in Manchester, Jones was presented with the company’s ‘Outstanding Contribution’ Award by the company’s new chief executive Andy Bruce, who thanked him on behalf of all staff for his years of dedication, strategic thinking, hard work and foresight which had helped to make Lookers the success it is today.

Appointed as CEO in 2009, Jones, was also inducted into the AM Hall of Fame in February and has also been named ‘Industry Icon of the Year 2013’ at the National Franchised Dealers Association Autumn.

The Lookers Guild of Excellence Awards, which is sponsored by DPP Communications Group, celebrates the achievements of all employees across the UK, formally acknowledging the contribution of individuals within different roles and in varying departments who have made an exceptional contribution in the past year.

Bruce said: "Peter Jones has been an exceptional leader who has successfully and strategically grown the company through challenging times and we are immensely grateful for his outstanding contribution and his distinguished tenure as CEO.”

The Guild of Excellence Awards is open to all 4,500 Lookers employees. A dedicated Guild website allows all staff members to see how they are performing in their respective leagues, which introduces a healthy element of competitive spirit. In addition to the performance related awards throughout the year, staff, who are nominated by their colleagues for going beyond the call of duty, receive monthly awards in recognition of their contribution.