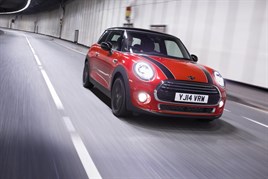 The new director of Mini in the UK, Chris Brownridge, is adamant that the familiar design of the next generation hatch will not impact on sales.

He says the improved efficiency and performance of the new model, its increased space and versatility and the new connectivity features it offers will attract people who have owned first- and second-generation models as well as new buyers.

Mini already has 4,000 advance orders in the UK for the new hatch, and they are 85% retail customers.

Brownridge said: "Our conquest rate is high. A significant number of people are coming out of other brands.”

But Mini is looking to improve its presence in the fleet market by attracting small businesses with the servicing and maintenance packages available.

Mini does not discriminate between retail and fleet customers for its Mini TLC service package - the deal is five years or 50,000 miles and is taken up by 98% of buyers.

Mini has been polishing other facets of its aftercare programme to coincide with the arrival of the new car, which is built in a £750 million extension to the Oxford plant.

By moving more of the dashboard assembly from outside suppliers to within the Oxford factory, Mini can now allow buyers to change the spec of the car they have ordered later in the day.

Mini has also started a programme to check the health of cars coming up for their first MoT test before the three-year warranty expires. The service is controlled from head office and provided by dealers.

Brownridge said: “It is a big help to our customers, is at relatively low cost to us and there's a sound business case behind it because we can end up selling the customer a new car.”

There are 390,000 Mini hatches on UK roads out of a total of 1.86 million (first and second generation) to have rolled out of Oxford. A further 540,000 cars - Clubman, Cabriolet, Coupe and Roadster - have also been made in the UK, while the Steyr factory in Austria has contributed an additional 400,000 (Countryman and Paceman).