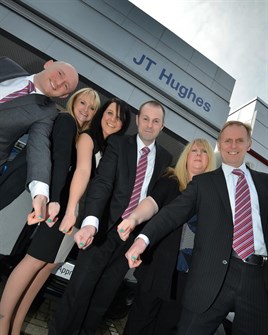 Shropshire dealer group JT Hughes has launched a campaign to urge people not to text while driving.

Its sales director Paul Tench, is asking drivers to paint their thumbnail with green nail varnish. The old school solution to a new world problem could save lives, he believes.

"If a driver forgets and instinctively reaches for their mobile whilst driving, the green thumbnail will serve as a warning to stop, put down the phone and concentrate on what he or she should be doing behind the wheel," he said.

JT Hughes, Honda, Hyundai, Nissan and Mitsubishi franchise holder, is donating £100 to charities nominated by each of the first three people who paint their thumbnails green and post a photograph on the company’s Facebook page at www.facebook.com/jthughesdealerships.

The idea was discovered by JT Hughes through a campaign by Steve Babcock who - to honour his late uncle who had been killed in an accident that involved texting and driving - was able to stop his own bad habit.

Texting while driving falls within the category of ‘distracted driving’.

More than half a million UK drivers (575,000) have points on their licence for using their mobile phone at the wheel or being otherwise distracted. One in 15 (6.5%) of these drivers have six points or more for distracted driving and four in five (78%) are male.

Tench said: “Painting your thumbnail green will prompt conversations with friends and colleagues so that the message will spread rapidly, especially on social media, and encourage more people to take part.”

More details and entry information for the JT Hughes campaign is posted at www.jthughes.co.uk where there is also a short video demonstration of how the green thumb reminder works.

JT Hughes has four dealerships located in Oswestry, Shrewsbury and Telford in Shropshire and Newtown in Powys.