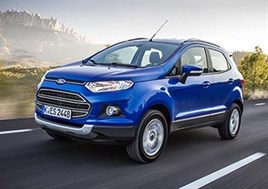 A similar link-up with Aupeo enables voice control of music from more than 200 European radio stations.

“These new AppLink partnerships significantly extend the growing range of smartphone apps drivers will be able to access by voice, while keeping their eyes on the road and their hands on the wheel.”

It also announced the release of a further 1,000 EcoSport SUVs in Mars Red, Kinetic Blue, Panther Black or Moondust Silver. They are available to pre-order exclusively via Facebook.