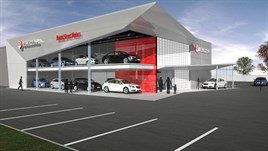 Vertu Motors expects to outperform its market expectations when it reveals its preliminary financial year results in May.

During those five months the group increased its gross profit per unit on new car sales in spite of the substantial volume increases. Core business margins were stable demonstrating the continued pricing disciplines and the earning of manufacturer volume bonus income and customer experience bonuses at a high level.  New car margins overall improved due to the higher margins generated by the Farnell Land Rover business following the acquisition in June 2013.

The volume of used vehicles sold by Vertu Motors in the period grew by 23.4% overall and by 11.1% on a like-for-like basis.

Vertu said the used car market remains supply constrained, as the recent up-turn in the new car market has yet to flow through into increased supply, and this has resulted in a very stable environment for used car residual values with strong profits generated on the disposal of part exchanged vehicles in the period.

Gross profit per unit strengthened on a like-for-like basis as a consequence of pricing stability in the market, pricing disciplines in the group and a focus on stock management and return on investment, it said.

The core business saw service like-for-like revenues grow by 6.7% which when combined with an improved gross margin resulted in the generation of an additional £1.1m of gross profit.

It added: "The outlook for the UK new car market remains positive, driven both by a positive consumer outlook and a supply push from manufacturers as they continue to direct higher volumes of product to the UK as a consequence of continued low level demand from the Eurozone.

"There is a risk that these trends may lead to pressure on new vehicle margins in the event of supply exceeding demand.  However, a higher volume market normally benefits the group in the short term through sales and in the medium term through higher aftersales volumes.

"March is the most important month for the profitability of the UK automotive sector as a consequence of the registration plate change and its impact on both new vehicle demand and the seasonality of servicing.

"The board is pleased to report that the like-for-like private new car order-take for March is currently running ahead of last year's levels.  Whilst there is clearly significant work to do during the month to deliver a strong March performance, this order-take level gives the board significant confidence.

"The board believes that, given the current strong performance of the Group and favourable market trends, the results for the year ended 28 February 2014 will be ahead of current market expectations."