Used car prices flat in February, but volumes up 14% YOY 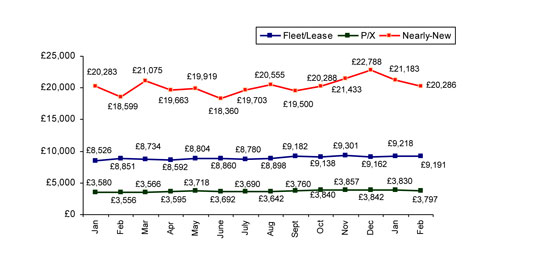 Used car wholesale volume dropped 15.6% in February compared with the month before, according to the National Association of Motor Auctions (NAMA). However, at 95,936 units, the figure was up 11,991, or 14%, on February 2013. Overall volume growth is being driven by cars more than six-and-a-half years old.

The average price of all used cars sold at auction was flat on the prior February but rose 0.3% above January’s figure to £5,442. The proportion of vehicles selling first time rose from 84% to 86%. NAMA said this was despite increases in average age and mileage.

The slight squeeze on used car stock availability evident during the final two weeks of February lingered into March but this was expected to fade as part-exchanges from new registration activity fed through to the auctions.

NAMA said: “Values are set to remain fairly constant across the board with only minor downward movements expected. Three- to five-year-old values look set to be strongest, with any weakness likely to be around late-plate values driven by the enormous pressure from new car transactional activity.

“Certain manufacturers are still playing the registration game which is unfortunate, but necessary for those with pre-planned production volumes in excess of latent retail demand either due to stronger product offerings from competitors or ageing model ranges due for replacement.”

The UK’s largest motor auction group, BCA, reported that its average value for dealer part-exchanges in February fell by £33 or 0.9% to £3,797. Year-on-year February values were ahead by £241 or 6.7%. The average mileage of part-exchanges was comparable to that of a year previously.

At Manheim’s auction rooms, the average part-exchange value for February was up £7 month-on-month to £3,216. Year on year, the average value was 9.4%, or £280, higher despite average age and mileage having increased.

“Feedback from main dealers suggests they are expecting a busy March and April, which in turn will generate a significant rise in volume through remarketing channels,” said BCA’s UK operations director Simon Henstock.

“As always, the best cars will continue to sell well, but for vehicles in poorer condition, with lower spec or higher mileage, it is vital they are valued to sell in line with market sentiment.”

Daren Wiseman, valuations services manager at Manheim Auctions, said: “It will be interesting to see how the market reacts as we head towards summer. We are continuing to see an increase in the number of vehicles coming to auction following the plate change. However, the growing volumes have not impacted upon the selling price.” He said this means that there continues to be high demand among buyers and predicted values would remain stable until the summer.

Manheim’s Wiseman said: “We are starting to see the volume of vehicles coming to auction increasing slightly following the plate change, but demand for retail-ready vehicles remains very high.” He predicted values would remain stable through April and said pent-up demand may continue until the summer. Nevertheless, medium family cars – the industry’s most popular segment – fell in value by 18%.

BCA’s Henstock warned that post-Easter values have typically dropped in recent years. That means dealers must be wary of stock coming into the market that appears over-valued.