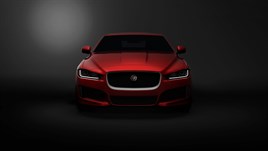 Jaguar has shown off the front of the new XE, the company's 3-Series rival to go on sale next year.

"The first of our Ingenium engine range will be used in our all-new mid-sized Jaguar sports sedan. That car will be called the Jaguar XE, and it will be unveiled in production form later this year."

The XE will be the first product from the new advanced aluminium architecture which was showcased in the C-X17 concept car in 2013.

Its global rollout will begin in 2015, and it will be the first aluminium monocoque vehicle in the segment.

Engines for the new car will emit less than 100g/m CO2 and are to be built at the Indian-owned company's new engine plant in Staffordshire, which is currently under construction.

Full details will be announced later in the year.