Toyota to increase marketing spend on hybrids to 50% 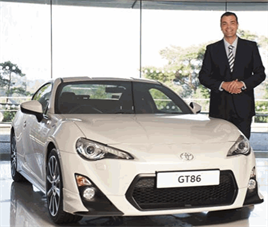 Toyota will increase its media spend on hybrid models to 50% over the next 12 to 18 months, up from 30% previously, as it looks to take advantage of its “leadership position” and reach the 100,000 hybrid vehicles sold milestone this year.

Speaking to Marketing Week in his first interview since taking over as UK marketing director in September, Chris Hayes (pictured) says all Toyota’s marketing and communication will be “heavily weighted” towards hybrid products. He claims Toyota accounts for 75% of hybrid vehicle sales in the UK, with its hybrid mix growing quickly in both retail and fleet markets.

“Hybrid really presents a unique selling point for us. It is synonymous with the brand. It is one area in the market place that we have a clear leadership position and we are looking to grow and we are growing,” he said.

Figures from the Society of Motor Manufacturers and Traders show that sales of hybrid cars grew by 17% in the UK last year to 29,131 vehicles, ahead of the 10.8% growth in the wider market.

A spokesperson says that while volumes are still “relatively small”, demand is set to rise in the coming months while growth in new car sales are expected to slow to 1% this year.

Toyota is hoping to reverse that decline in market share with an increased focus on marketing.

Hayes says the fact the car marque brought back the marketing director role two years after it scrapped it show it is in a “good place” to strengthen marketing and increase the role it plays across the business.

That will kick off from May with four campaigns for new models planned this year, including updated versions of its Aygo and Yaris vehicles, that will “take the white coat” off the Toyota brand and see it become more “useful, fun and vibrant”, he claims.

Hayes says Toyota will get that message out by leveraging newer platforms such as social media and with a tone of voice that is “much more optimistic and creative” as it targets younger customers.

Hayes admits that Toyota, and the auto industry in general, is playing catch up with many other sectors and it must work to create a more connected customer experience if it wants to appeal to a broader demographic.

“We’ve got to get a lot better as a sector as well as a brand at bringing offline and online experiences together,” he said.