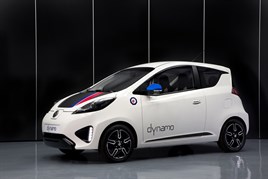 The concept vehicle is the latest MG to be created at SAIC Motor’s European Design and Technical Centre (SMTC), located with MG Motor UK, at the Longbridge site in Birmingham.

MG’s heritage is undeniable, but in many people’s minds – particularly those dealers that remember the pain of the 1990s – the brand’s recent history is not something to dwell on.

However, Sam Burton, MG Motor head of sales, insists the brand is at the beginning of an evolutionary cycle: “This year, MG celebrates its 90th anniversary as a brand. But as a current business proposition to the motor industry we’re a company that doesn’t have a legacy to offer. We’re not able to say we’ve got a database of 100,000 customers out there and you’re guaranteed their business.”

There are thousands of current and former MG Rover owners in the UK, but their data was not part of the deal when the Chinese bought MG.

So, from a dealer point of view, MG’s current proposition is based on the ability and opportunity to attract customers. As a sales operation, it’s early days.