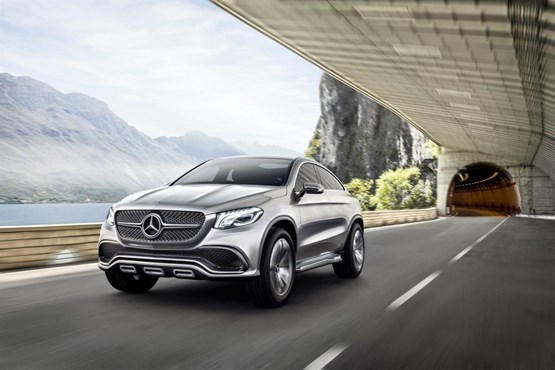 Mercedes-Benz has revealed the first image of its Concept Coupe SUV which would rival the BMW X6 in production form.

The new model has been created to open up new customer segments for Mercedes to target, in competition with BMW and Audi.

Dr Dieter Zetsche, chairman of the board of management and head of Mercedes' car division, said: “With the Concept Coupe SUV we aim to secure new customers by opening up new segments for Mercedes-Benz.

“We see a great deal of potential for Mercedes-Benz in the combination of coupe and SUV.”

The new SUV, based on the same platform as the ML and GL, and expected to be called MLC, will be built at Mercedes’ factory in Tuscaloosa, Alabama, in the USA, and share the same range of four-cylinder, V6 and V8 engines, including an AMG version and a new plug-in hybrid.

Mercedes is looking to boost its range by 12 new models before 2020, with new models including a CLA Shooting Brake, GT AMG supercar, expansion of the S-Class range and a small SUV aimed at being a rival to the BMW X4.

There will also be successors for the Smart Fortwo and four-seat Smart Forfour towards the end of this year.