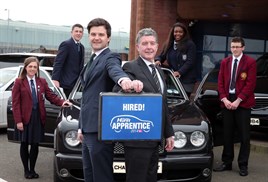 The competition, which was organised in partnership with Business in the Community (BITC), saw teams of students from four schools pitching their worth to Charles Hurst’s operations director and judge - Colin McNab.

As part of the exercise, each team was awarded £500 pounds to enhance the value of their chosen used car with a view to making a profit for their school once the vehicle sold at auction.

Malone College aided by their mentor Robert Currie come out on top with a £220 profit on their Jeep Cherokee at Wilson’s Auctions, Mallusk.

McNab was so impressed with the performance from the students that four were appointed for paid positions as apprentices at Charles Hurst this summer.

Sophie Henry from Hazelwood Integrated College, Cody Kennedy from Malone College, Tom Donnelly from Belfast Royal Academy and Emine-Imo Ottong from Methodist College will work across a number of divisions at Charles Hurst.

McNab said: “We’re always up for a challenge at Charles Hurst and through this important community initiative; we had the great pleasure to work with a remarkable group of individuals who went to great lengths to show off their individual skills and tenacity while working as part of a team.

“As Northern Ireland’s largest car retailer, we know that our most important asset is our staff and we’re really excited to see that the next generation of school-leavers are prepped and ready to go.”