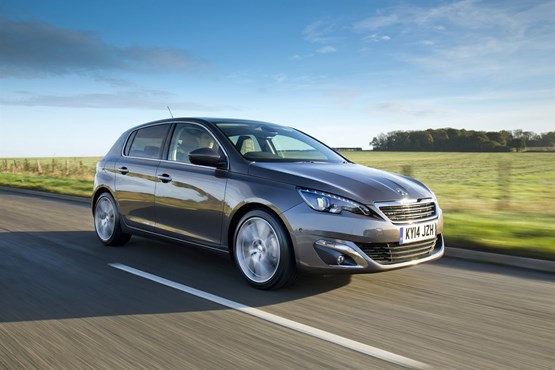 Peugeot is expecting a sales boost in the UK from two new small turbocharged petrol engines which, the company claims, will also start to reduce its traditional reliance on diesels.

The new PureTech petrol engines - 1.2-litre three-cylinder direct-injection units developing either 110 or 130bhp, with diesel-like torque figures of 205 and 230Nm respectively - debut in the new 308 and soon-to-arrive 308 SW. They are destined for the 208 and 2008 later in the year.

Unlike the 1.6-litre four-cylinder 125bhp unit in the previous 308, which was a joint development with the BMW Group, the new turbo engines are all Peugeot's own work, and feature a 21% improvement in economy and 18% improvement in CO2 emissions, according to official figures.

As a result, Peugeot is expecting a sizeable shift in overall sales and the share taken by petrol engines for the new 308 range. It is confident of improving 308 sales by 22% this year - 3,000 cars - with all the increase attributed to the new engines.

With the new engines, the company is predicting a 29% share for petrol in Britain and 27.5% in Europe.

The change in the balance will be most noticeable among private buyers: Peugeot expects petrol engines to take a 60% share compared with 40% previously.

A Peugeot spokesman sad: “The 120bhp 1.6-litre diesel will still be the number one choice among fleets, but the new petrol engines will change the overall landscape.”

This will bring Peugeot's petrol-diesel sales mix closer into line with those of the Ford Focus. Ford's 1.0-litre EcoBoost 1.0-litre turbocharged petrol engine takes 41% of Focus sales in the UK, and 70% with retail customers.

The new turbo engines join 1.0- and 1.2-litre normally aspirated three-cylinder PureTech units, which Peugeot has already introduced for the 108, 208 and 2008 ranges.