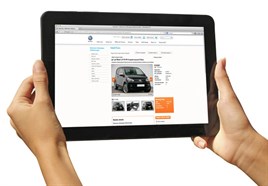 “When the customer walks into the dealership it’s all there for the sales person. It’s a case of ‘let me load your information’ and they can start the sales process,” explained Fleming.

Today’s customers use digital media in various ways, but it’s important to remember they don’t all use the same ones. So while a 50-year-old might be comfortable with websites and email, a 40-year-old will access them on the go via a smartphone. A 30-year-old could be a tablet user, and while a 20-year-old is a

In order to engage physically with all those different people, you need to be on their wavelength digitally. Key to that is a DMS built on an architecture that permits easy and swift integration, not of just today’s social media but tomorrow’s as well.

What dealers can learn from Apple stores

Another of the big challenges to ensuring a seamless transition from digital to physical is changing the ingrained habits of people who remember a time when every customer came in clutching a copy of the local newspaper.

“People have grown up in the industry and been used to doing things in a linear way,” said Ian Plummer from VW. “But customers don’t work like that any more. It’s about the sales executive delivering what the customer wants, not what the sales executive is comfortable with because they’ve been doing it that way for many years.”

Key to that is having the right people in the right roles. Many manufacturers actively encourage retailers to source new staff from outside of the industry, and make hiring decisions based on attitude rather than sales skills. The former can’t be taught, the latter can. It’s about having passionate people, who are good  at dealing with customers and love that engagement.

Apple pioneered such an approach in its stores, with staff who were trained to seduce customers into buying by connecting with their feelings and promoting the products’ benefits. What they never do is discount and incentivise.

BMW took a leaf out of Apple’s book last spring with the nationwide launch of its ‘Genius’ programme, following a successful pilot scheme. A genius is a staff member who has no involvement with the actual sale, but is there to qualify the customer, introduce the right product for them, answer questions and supervise a test drive. The customer is then handed to a traditional sales executive who will complete the deal.

Cotswold BMW in Cheltenham has embraced the initiative, with six new car geniuses and one for used vehicles. Salary accounts for 85% of their earnings, and even the commission is determined by test drive volumes and customer satisfaction. Put simply, they’re not motivated to give people the hard sell.