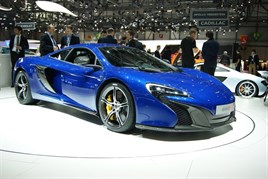 McLaren might be one of the biggest names in Formula One but there is a big job to do in getting the company's road cars on the shopping list of supercar buyers.

Mike Flewitt, chief executive officer of McLaren Automotive, said: "We are not in the same league as Ferrari or Porsche in terms of recognition for road cars but then we are still a very young company. We have only been making them for three years and we are making very good progress.

"The job we have is to communicate that McLaren cars are the technology leaders in their class, true drivers' cars and we do have a great racing heritage to call on."

Flewitt said there are no plans to broaden the model line up beyond two-seater sports cars, so no four-seat four door and "definitely no SUV". He added: "For one thing we do not have the technology or platforms and we want to stay true to our principles."

Flewitt is well aware of the change in the profile of supercar buyers, increasingly younger, but very rich, Chinese and Middle Eastern rather than the wealthy and discerning Americans and Europeans of old."

Part of the plan is to get more cars on the road and more dealers around the world. Flewitt said that the company will continue to bring out a new product every year, raising production from around 1,600 last year to around 4,000 by 2016 while the global network will increase from around 50 now to 100.

Flewitt said: "We showed the P1 concept at the Paris Show in 2012 and the road car was unveiled at Geneva last year with a plan for a limited run of 375 cars and we sold out. This year we have the 650S, an evolution of the 12C. Right now we have a number of programmes for new models and updates running in parallel."

Among these, he added, is the P13, due for launch in September next year at around two thirds of the price of the 650S, and a track version of the P1, again in limited numbers.