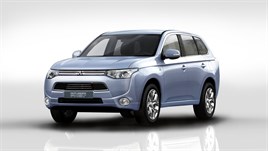 A special event is to take place across the Mitsubishi dealer network to mark the launch of Mitsubishi’s Outlander PHEV.

Taking place over the weekend of 7th and 8th June 2014, staff at every Mitsubishi dealership will be welcoming people to see the 4x4 plug-in hybrid electric vehicle, which Mitsubishi claims is a "game changing" vehicle for the industry.

The dealer event follows the highly successful media campaign for the Outlander PHEV that has generated significant interest in the vehicle.

The Outlander PHEV meets the criteria for the Government’s Plug-in Car Grant for ultra-low emission vehicles, and prices range from £28,249 to £34,999 (post-grant).

It is also exempt from Vehicle Excise Duty and is congestion charge-free too. In addition, the Benefit in Kind (BIK) for company car drivers is just 5%, which is a virtual pay rise of thousands of pounds per year.L

Lance Bradley, managing director of Mitsubishi Motors in the UK, said: "We’re all delighted to see the Outlander PHEV arrive in the showrooms. The Outlander PHEV is the first SUV plug-in hybrid in the UK market that boasts 4WD capability with an EV range of 32.5 miles and emissions as low as 44 g/km. It’s truly a game-changer."

Outlander PHEV 'Discovery Workshops’ will also be taking place over the weekend, which will see various aspects of the PHEV explained to small groups of customers, such as charging the vehicle, the Plug-in Car Grant, company car taxation and fuel economy. Smartphone app demos will also be given.

The Mitsubishi Outlander PHEV is the only plug-in hybrid on the market to be priced at the same level as the diesel equivalent, once the Plug-in Car Grant has been taken into account, making it a viable alternative to a conventionally powered vehicle.