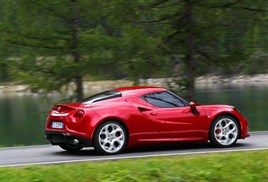 Alfa Romeo is expected to grow its global volumes by 440% over the next five years with the launch of eight models covering most segments of the market.

The ambitious new plan from Fiat Chrysler Automobiles (FCA) is part of a five year recovery which was revealed to investors this week.

FCA is investing £4.1 billion in new rear-wheel all-wheel drive models which will include a midsized model by Q4 2015 and new Cloverleaf model before the end of 2015.

Harald Wester, Alfa Romeo chief executive, admitted that recent models did not get the historical DNA of the brand right.
Wester said: “With the exception of style, the DNA of the Alfa Romeo brand had not been respected.

“Our German competitors had built a phenomenal lead over us over a number of years. We had little credibility in making ’traditional’ assertions or projections about Alfa.”

Wester said the solution had to be radical and the new Alfas would benchmark against the best the German industry has to offer.

The new models are being developed with a “skunkworks” or experimental laboratory style structure, focussing on innovation and experimentation.

According to Wester, Alfa Romeo’s engineers will not be bound by traditional processes and will resist the conformist pressures that a mass car producer would exert.

Two senior heads from Ferrari are leading Alfa Romeo’s future model development. The skunkworks will have a team of 200 dedicated engineers which will increase to 600 by the end of 2015.

Wester said: “There will be no interference from the FCA machine except where talent is required.”

FCA has also committed to an all Italian future for Alfa Romeo. All future product, including engines, must be built in Italy to warrant wearing the Alfa Romeo badge.