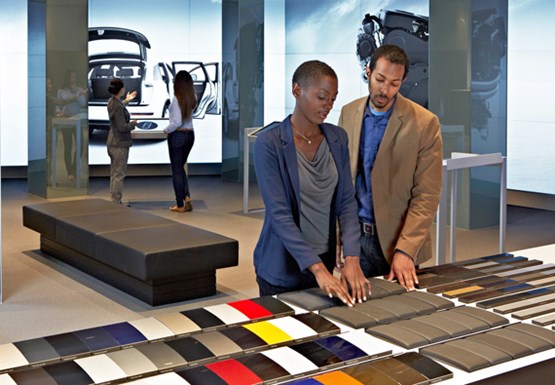 Automotive brands are constantly striving to find new and better ways of engaging customers in their retail environments – with showrooms evolving to offer everything from coffee bars and free Wi-Fi to vehicle handover lanes and glass-walled service viewing areas.

So what’s next for manufacturers that want to further distinguish their brands and make dealerships a more welcoming place for consumers? Could the next-generation showroom experience be largely digital – as some brands are already experimenting with – or is old-fashioned customer service the key to winning and keeping customers?

When Audi launched its innovative Audi City facility in London’s Piccadilly in 2012, operated in partnership with Sytner Group, it wasn’t just an international marketing gimmick with an eye to the Olympics – the manufacturer was  ushering in a new generation of car showrooms. Positioning it among some of the costliest real estate on the planet may appear questionable, but rather than hemming customers in where space is at a premium, Audi has managed to offer potential buyers a world of possibilities in prime urban retail property.

Rather than stocking an abundance of vehicles, multi-touch displays let customers configure the car of their choice from about 300 million possible combinations in full scale on floor-to-ceiling digital monitors. Potential customers can view every angle in high resolution, but can also touch elements of the cars. Customers can save choices to a personal USB stick, which they can use at home, online or in Audi showrooms to ensure a bespoke choice when it comes to the final sale.

Audi’s intention has been to bring the showroom to the customer, with a focus on wealthy, highly populated areas. It plans to open 20 of these ‘cyberstores’ in major international cities by the end of 2015, linked with traditional dealer ‘spokes’ on the outskirts of high-cost areas.

Audi product affairs manager Robin Davies said: “We have seen a 70% increase in sales leads from the Audi site in Piccadilly since it was repurposed as the technologically advanced Audi City London in 2012. First-time Audi buyers accounted for two-thirds of these sales, so we are in no doubt that the concept works.