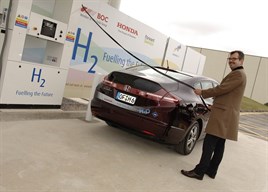 UK researchers believe they have discovered a viable solution to the challenges of storage and cost of hydrogen fuel production.

Research from the Science and Technology Facilities Council (STFC) has discovered that ammonia can be used as a clean and secure hydrogen-containing energy source to produce hydrogen on-demand in situ.

Hydrogen is one of the future alternative to electric vehicles but there have been issues with its safe and efficient storage and concerns surrounding the costs of a hydrogen infrastructure for transportation.

STFC believes it has discovered a process which can separate ammonia (a technique known as cracking) to form one part nitrogen and three parts hydrogen at a fraction of the cost from current methods.

Professor Bill David, who led the STFC research team, said: “Our approach is as effective as the best current catalysts but the active material, sodium amide, costs pennies to produce. We can produce hydrogen from ammonia ‘on demand’ effectively and affordably.

“Few people think of ammonia as a fuel but we believe that it is the natural alternative to fossil fuels. For cars, we don’t even need to go to the complications of a fuel-cell vehicle.

“A small amount of hydrogen mixed with ammonia is sufficient to provide combustion in a conventional car engine.

"While our process is not yet optimised, we estimate that an ammonia decomposition reactor no bigger than a 2-litre bottle will provide enough hydrogen to run a mid-range family car.

“We’ve even thought about how we can make ammonia as safe as possible and stop the release of NOx gases. This fundamental science therefore has immense potential to change the use of hydrogen as a fuel."