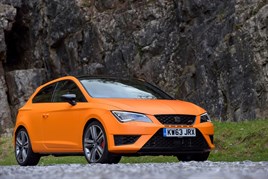 Seat UK is on course to achieve double its normal rate of hot hatch sales with the new Leon Cupra.

Typically, hot hatchbacks command a 3% share of the mix of the cars they are based on, but early orders suggest the Cupra will take 6%.

There are five versions of the new Leon Cupra, based on the three-door SC and five-door hatchback bodies.

Four are powered by a new 277bhp 2.0-litre turbo engine, making them the most powerful and fastest Cupra models Seat has ever made.

At the Nurburgring, the 277bhp version recently set a new record time for a front-wheel-drive car of just under eight minutes.

"We are up 22% against an overall industry increase of 11%," said Williamson. "The dealers are growing in confidence and starting to invest, we are doing well in retail and good fleet channels and we are not doing deals to the daily rental companies. Eighteen months ago there was a sense of crisis, but that has gone now."

Last year's launch of the Leon ST has opened up "a whole new world" for the brand, says Williamson. "It has made us credible in the fleets and we have done a couple of really good deals with Centrica and Zurich," he adds.

"The challenge now is to beat the Volkswagen Golf estate. I don't think we'll do it, but we're going to try."

In 2016 Seat will belatedly get its first SUV, based on the VW Tiguan, which promises to give the brand another fillip. Williamson - who came to Seat from Nissan 18 months ago and headed Mercedes-Benz Retail Group UK before that - knows its importance to the range.

"When I look at what SUVs did for Nissan, it brought a whole load of new customers in," he says.

"The segment is growing almost every day in terms of new entrants, but it is really hard to plan volumes. The segment is either going to slow down because it has become too aggressive, or get even bigger because the cars meet people's needs.

"As far as Seat is concerned, the story is not over. Looking at the longer-term future, I don't think one SUV is enough. Most companies have more than one.

"And I would love to see us produce something which is really niche. It wouldn't be sold in huge numbers, but it would show that we are really starting to sizzle."