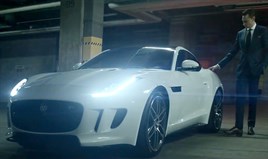 British carmaker Jaguar has been tackled by the advertising watchdog for the second time within three weeks for online videos that "encouraged irresponsible driving".

The manufacturer has been warned not to portray speed or driving behaviour that might encourage motorists to drive irresponsibly in future, and has had a second online  promotional video banned.

This latest complaint concerned a YouTube video, part of Jaguar's #GoodToBeBad campaign, which starred actor Tom Hiddleston driving a Jaguar F-Type in an underground car park and on a public road.

The Advertising Standards Authority noted that speed was not a primary feature of the video however it took offence to certain sequences within it which suggested significant speed and acceleration, despite on-screen text stating that it was filmed with a professional driver on a closed course and encouraging viewers to obey speed limits.

"Whilst we acknowledged the sequences were brief, we considered that the second part of the ad suggested that the car was being driven at excessive speeds and that the ad therefore encouraged irresponsible driving," said the ASA.

Although the video is now banned from Jaguar UK websites, it is still viewable on YouTube through Jaguar USA.

Three weeks ago another Jaguar video, hosted on its own website, was banned by the ASA for "glorifying speed".