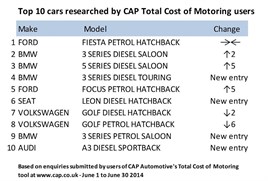 It means cost-conscious motorists are investigating cars from Volkswagen Group and BMW more than any other car brand group, according to its analysts.

But Ford managed to hold onto the number one slot again, reaffirming the Ford Fiesta as Britain’s most wanted car.

Every month the independent car cost experts at CAP measure consumer interest in the long-range financial impact of cars researched by visitors to its specialist Total Cost of Motoring tool at its website.

In June eight out of ten car running cost ‘look-ups’ by motorists at cap.co.uk were for Volkswagen Group and BMW, with Ford taking the only two remaining places.

The top ten was almost completely divided between Volkswagen, with its group brands Audi and Seat, and BMW with each taking four of the top ten places. Ford Fiesta remained at number one, with Ford Focus also maintaining its long-held place in the chart.

Also notable in the June motoring cost research chart was the ongoing interest among motorists in diesel cars, which still account for the majority of consumer investigations into long-term costs.

CAP retail and consumer editor, Philip Nothard, said: “Our chart shows is that if it’s German-built or owned, with a diesel engine under the bonnet, people want it.

“The chart is a good measure of consumer aspirations because when people are looking more deeply into the costs of owning a car over time it means they’re thinking more seriously than if they were just browsing car adverts.

“In this case they are looking to see what future depreciation to expect, how much they’ll pay for servicing and maintenance, fuel consumption for their own expected mileage and other cost factors.

“Motorists want to take more control of their financial destiny than ever before and our chart for June reinforces the fact that German cars, diesels and Fords are all trusted by the consumer to offer benefits of economy.”