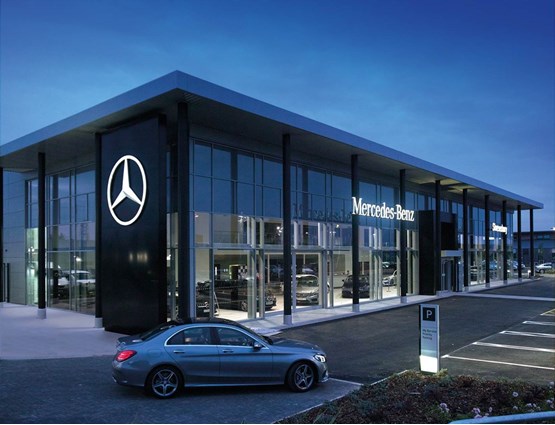 Drayton Group has made a multi-million pound investment in a new-build home for Mercedes-Benz of Shrewsbury, becoming the first site outside of Germany to bear the new Mercedes-Benz showroom style.

Central to the new design is the appearance of a large, illuminated Mercedes-Benz star against a black background on the showroom exterior that will face the major approaches to retailers, and will clearly identify the business to customers.

Inside the building black and white replaces pastel shades to provide an understated backdrop against which the latest cars are displayed.  The use of walnut furniture throughout the showroom is designed to further enhance a modern retail environment.

Replacing its previous home of 25 years in Battlefield Road, the new Mercedes-Benz of Shrewsbury has been constructed on a three-acre site to offer existing and future customers bigger and better facilities and service than ever before.

The 24-car showroom is double the size of the former premises, and features lounge areas where visitors can wait in comfort, continue with their work and even watch their car being serviced on screens relaying activity from the retailer’s 14-bay workshop.

A display of more than 60 approved used Mercedes-Benz cars and improved customer parking are among the other benefits resulting from the move.

The opening of the new dealership cements Drayton Group’s association with Mercedes-Benz UK - it has been a franchised dealer partner with the manufacturer for over 40 years, has seven retail outlets in the Midlands and has represented the brand in Shrewsbury for 30 years.

The group was named Mercedes' UK retailer of the year for 2013.

Marcus Breitschwerdt, head of region Europe for Mercedes-Benz Cars, said: “This incredible new dealership is second-to-none and provides a fantastic environment in which to display our cars, and to look after our existing and future Mercedes-Benz owners.

"Mercedes-Benz of Shrewsbury also provides a taste of what motorists around the UK can look forward to when we commence the roll-out of our new brand architecture at the beginning of 2015.”

More than 500 customers attended a special event to celebrate the opening, where they had a tour of the premises.“

The timing of the build coincided with the new Mercedes-Benz corporate identity being introduced globally, and meant that Mercedes-Benz of Shrewsbury is the first European site outside Germany to open with this new style, which is another highlight for the business after we were recently named Mercedes-Benz Retailer of the Year,” said Ken Forbes, Drayton Group chairman.

“It is a truly magnificent facility – one that meets the future needs of the business and from which we can be proud to serve our customers in the Shrewsbury area for many years to come.”