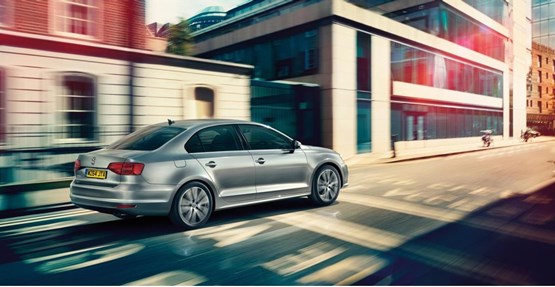 The revised Volkswagen Jetta is now available for order in showrooms, ahead of first deliveries in December.

The new Jetta – which made its debut at the New York Auto Show in April – features revised styling front and back, enhanced features and trims and greater efficiency.

The Jetta’s styling has been updated to make it sleeker, with an overall improvement in aerodynamics of 10%.  At the front, there’s a revised radiator grille with three horizontal fins, and a reprofiled bumper beneath.

At the rear the boot lid has been redesigned to incorporate an aerodynamically efficient lip, which extends into the wings at the side.  Beneath this are new tail lights and a revised bumper.

Inside, the Jetta comes with revised instruments, a new design of steering wheel, a variety of new trims around the centre console and new fabric designs for the seats and door trims.  New ambient lighting in the Jetta GT gives an upmarket feel.

All new Jetta models will feature BlueMotion Technology modifications, including stop/start and battery energy recuperation, and all engines are compliant with EU VI emissions legislation.