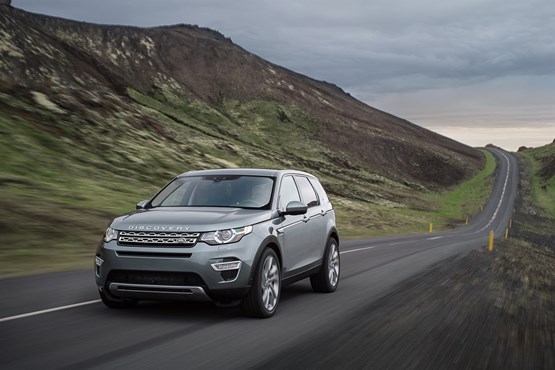 Land Rover dealers will offer the Discovery Sport model from below £30,000 when the new car arrives in 2015.

The SUV manufacturer has announced that all Discovery Sport models will have 5+2 seating as standard and the entry two-wheel drive model, an eD4 variant, will be priced below £30,000 when it reaches the market.

Land Rover is billing the Discovery Sport as "the world’s most versatile and capable premium compact SUV" and revealed it digitally at Spaceport America with news of a Galactic Discovery competition to send four winners to space with Virgin Galactic.

However that model won't be available until some months after the initial launch of the new SUV in January 2015, when a £32,395 SD4 variant will be the entry point.

Land Rover is billing the Discovery Sport as "the world’s most versatile and capable premium compact SUV" and revealed it digitally at Spaceport America with news of a Galactic Discovery competition to send four winners to space with Virgin Galactic.

“Our challenge has been to combine premium design with exceptional versatility; the two attributes must work in harmony,” said Gerry McGovern, Land Rover design director and chief creative officer.

“I’m proud to say we’ve achieved that; Discovery Sport’s dynamic design will resonate on an emotional level with consumers, and this vehicle is more versatile than any other premium compact SUV on the market.”

Land Rover said the spirit of adventure is reflected in Discovery Sport’s interior, which has been designed with customers at its core, and features high-quality materials, while the core Discovery value of versatility is evident everywhere with storage solutions integrated into the cabin and up to four 12V power points and six USB charging sockets can be specified for all three rows of seating.

Innovations have allowed Discovery Sport to introduce the versatility of 5+2 seating into the premium compact SUV class for the first time.

An all-new multi-link rear axle not only provides engaging driving dynamics but it also provides ample and flexible cabin space behind the second row.

Coupled with supple long-travel suspension, the innovative rear axle also ensures the Discovery Sport is comfortable, refined and rewarding to drive on-road, while retaining the breadth of all-terrain capability for which Land Rover is world-renowned.

With approach, departure and breakover angles of 25, 31 and 21 degrees respectively, Terrain Response technology, and the ability to wade to 600mm, Land Rover is claiming class-leading capability in all conditions for Discovery Sport.

Inside the car is an all-new 8-inch touchscreen infotainment system and standard tilt-and-slide row-two seating for maximum interior configurability.

From launch in the UK, the new Discovery Sport will be equipped with the powerful and refined 2.2 litre SD4 turbodiesel engine producing 187bhp featuring stop-start technology, high-pressure direct injection, low-friction internal components and smart regenerative charging for outstanding performance and economy. Both 9-speed automatic and 6-speed manual transmissions are available.

A service plan will be available for Discovery Sport from launch in the UK, offering five years or 50,000 miles worth of servicing (whichever is sooner) at an approved service centre for a one-off fee of £499.

It goes on sale in January 2015 in the UK alongside the existing seven-seat Land Rover Discovery.