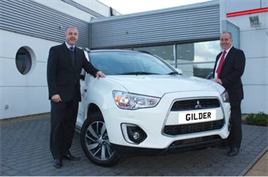 A new Mitsubishi dealership is set to open in Rotherham.

Gilder Mitsubishi Rotherham, which will be based at the Mushroom Garage in Doncaster Road, continues the growth of the Mitsubishi network, after 18 new dealerships opened in 2014.

The new dealership, which opens on today, is part of the Gilder Group, a family-run dealership group that was first formed in Sheffield by William Gilder in 1938.

Darren Stolz, sales manager at Gilder Mitsubishi Rotherham, said: “Gilder Group has been going for more than 70 years now and we are confident that our excellent reputation, together with Mitsubishi’s fantastic range of vehicles, will make this a successful partnership. This is a very exciting time for everyone at Gilder and we are really looking forward to opening with Mitsubishi.”

The Rotherham site also has the Honda franchise.

Mitsubishi Motors saw sales growth in passenger cars of 75% compared with the previous year, against an overall market up by 9.3%.

Lance Bradley, managing director of Mitsubishi Motors in the UK, said: “The Rotherham dealership is based in a local landmark and the team are well known in the area for delivering great customer service, which is something that is vitally important to everyone here at Mitsubishi.”