This year has been extraordinary for dealers, whether their principal focus was on new or used cars. Almost nothing about 2014 represented business as usual.

Sky-high new car business has been the biggest distraction for most of the year, but if you were trying to sell anything in Scotland, the September referendum killed business altogether for a time. Even the pattern of used car trade values has proved slightly different, with rapidly spreading alarm among dealers about how seemingly dramatic the trade and retail slowdown felt, when it came.

The response of dealers to the usual post-September slowdown has been particularly curious. At the end of November, my phone was ringing non-stop with dealers saying “Is it just me, or has the market gone off a cliff for everyone?”.

Yet analysis of trade values over the course of 2014 showed that, at the end of November, values were slightly ahead year-on-year. That represents a reduction (at three years, 60,000 miles) of 8.3%, compared with 9.4% to the same point in 2013.

Car dealers have become accustomed to a strong market

What seemed to be happening was that dealers have become so accustomed to a strong market that any softening in demand felt especially painful. There is also probably a psychological impact when the market does not perform as it did the year before, because everyone is now measuring performance more than ever before. So, as the chart shows, October of last year actually brought a modest increase in trade values while this year has not seen trade values increase since April. But, before we get carried away, the gap between values this year and last has rarely wandered wider than about one half of one percentage point.

Possibly of more curiosity value has been the performance of advertised retail values. From February to June, advertised prices were ahead of last year by up to £1,500. But then the situation reversed in July, so that average advertised prices were almost £1,000 lower in August 2014 than a year before. Further work is required to identify whether these figures represent like-for-like vehicles – and therefore actual value changes – or whether there were simply more smaller, cheaper cars in the market. 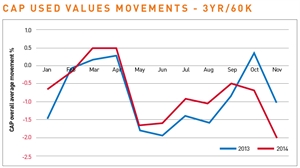 However, the real elephant in the room for used car dealers is the relentless push of new product by manufacturers. For the first time, it really has become possible to argue to a consumer that they can be better off every month for buying a new car instead of a used one.

One certainty about the coming year is further change. Dealers have fresh FCA legislation and the Consumer Bill of Rights to contend with, which means more time spent focused on compliance. All of this is against a backdrop of burgeoning PCP and PCH business, which is turning the traditional car buyer on to the concept of not owning a vehicle. 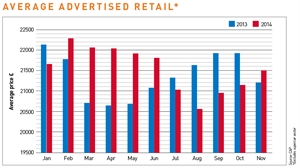 Perhaps only one thing is really guaranteed in this climate; the only area in which the used car specialist has total control is the experience they deliver to the customer. My view is that quality of customer service will become an even bigger differentiator for used car dealers than we know it already is.