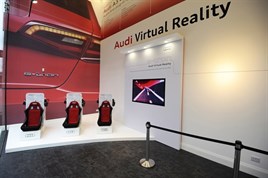 “If you look at costs of dealerships and the profit margins, something has to change. It’s like the big supermarkets cutting back on unprofitable hypermarkets; the retail customer wants something different now.

“Just a few years ago, on average, people visited three showrooms before buying a car, they now visit one – the internet has changed everything. Augmented reality as well as bringing the showroom to say, a Westfield, as a pop-up will become some of the main ways we interact with customers going forward – you can’t wait for the customer to come to you anymore.”

“Absolutely! It’s about making the buying experience as easy as possible for the customer. That could mean augmented reality slowly replaces showrooms to an extent,” she said.

Land Rover launched its AR campaign in December creating a life-sized view of the all-new Discovery model, through headsets, for dealerships that didn’t have a real model on display.

Honda’s European marketing director Martin Moll told Marketing Week that he thinks the showroom experience will be trimmed down, using AR instead of expensive concept cars.

National communications manager for Skoda Erica Vernon added: “The digital showroom is what we want to move towards completely. There will always be a room for a showroom, but it won’t be defined by a retail park location like before. The showroom could be an app on a phone or a virtual experience at rush hour within Waterloo station – it can be everywhere.”

Most recently, Skoda was at Waterloo train station in London displaying its AR technology to members of the public. Passers-by stopped to design their own version of the new Fabia model via a pop-up kiosk before adding an image of them behind the wheel and having it displayed on a large screen.

Fiat worked with magician Dynamo to promote the 500X giving customers a ‘virtual’ ride in the model. Ford launched a reality app which allows people to visualise a life-size version of the car right in front of them.

And Audi used 3D technology to give virtual test-drives of the A3 E-tron (see image).

BMW has also created AR glasses to allow drivers to see through the car.