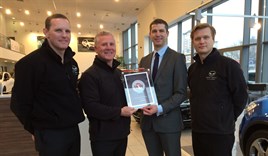 The dealership on Airbles Road won the award which recognises and rewards top performing retailers for the quality of service they give to their customers, using only customer satisfaction as the judging criteria – the dealership also won the same award two years ago.

Peter Vardy's Motherwell managing partner Scott Reid said: "What a fantastic start to the year. To win this award again is a great achievement and we would like to thank all of our customers for continuing to represent us in such a positive light in Vauxhall’s satisfaction surveys and therefore helping us to secure this incredible award.

"When customers visit our dealership, they can feel confident that they will be receiving truly dedicated customer service. Indeed, as we are so committed to customer care, we’ll be doing our very best to ensure that we make it a hat-trick of award wins next year."

Retail sales director at Vauxhall for the UK and Ireland Steve Catlin, who presented Scott and his team with the award at the dealership this week, said: “At Vauxhall, we recognise that the Peter Vardy dealership in Motherwell has gone that extra mile to help our customers and make their purchasing and servicing experiences as positive as possible. The award really is a representation of the hard work that’s gone into their consistent standards and all round high performance."

The Motherwell team have been presented with a plaque announcing their accolade to display at the dealership in March and a special logo will be placed next to their name in the Vauxhall dealer locator, in addition to receiving commemorative badges for all staff.