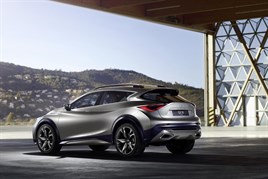 Infiniti has revealed the first full glimpse of the all-new QX30 concept, ahead of its world premiere at the 2015 Geneva Motor Show next month.

The crossover concept hints at a future premium compact vehicle and gives a strong indication of the brand’s commitment to this segment.

The designers have given QX30 concept a more pronounced aluminum-trimmed bumper up front, while rounding up the rear with a tough skid plate sculpted with nuanced graphics.

It also features carbon-fibre in the lower cladding and roof-bar supports to save weight.

Infiniti executive design director Alfonso Albaisa said: “We wanted the spontaneous fluidity of the QX30 concept design to cut through the urban clutter and rigidity, reflecting its go-anywhere and spur-of-the-moment nature.

“The QX30 concept has been designed to make occupants feel safe and protected inside, and customers can drive in or out of the city without worrying about nicks to the chrome features.

“The QX30 concept design conveys a sophisticatedly gritty sense of strength and durability, but tough doesn’t mean rough. We’ve retained a sense of artistry throughout, even in the most functional of parts.”

The QX30 concept can be seen at the 2015 Geneva Motor Show, next month, which is open to the public from March 5.