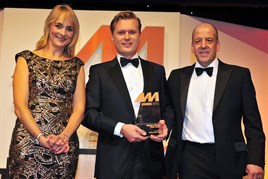 From a standing start on its opening in early 2014 with a blank customer database and existing aftersales business, this newly built Glasgow used car centre sold more than 2,600 vehicles.

It is a unique concept to the Scottish group, drawing together many modern retailing concepts to ensure “customers receive an exceptional experience throughout their used car purchase journey”. From the concierge meeting the customer at the door to the handover team who deliver the vehicle to the customer’s favourite music, everything has been considered.

It is a low-pressure sales environment, but the team of 75, led by managing partner Darren Cuthbertson, analysed every part of the process to ensure it was of the highest standard. This led to a rigorous quality check and approval processes for the stock. However, it also led to the introduction of an ice cream van rather than a coffee station and children’s play areas with games consoles, iPads and electric racing cars. After less than a year in business, the site has turned a net profit of more than £160,000.

Peter Vardy, the judges said, had been incredibly innovative in dressing up the sales process, adding ‘razzmatazz’ that would get visitors talking to their friends even if they left without buying.

The team is a “car-selling machine”, BDO concluded, achieving 300 deals per month. “There’s no doubt customers have a unique experience along the way,” the auditor concluded.