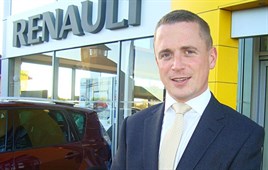 Brayleys Cars has announced that it has appointed Mark Corr (pictured) as its new operations director.

Aged 32, Corr is one of the youngest operations directors of any car retail group in the UK motor industry.

Corr began his automotive career as a dealership ‘site boy’ when he was 17, he was promoted to sales manager at 24 and at 28 was sales director. Now, he is responsible for the daily running of Brayleys’ eight franchised businesses at six locations across Buckinghamsire, Hertfordshire, Essex and North London, which together employ over 170 staff.

By following his philosophy of ‘service is key to success’, Corr has developed into a strong and decisive member of the company’s management team and was even shortlisted for a prestigious Young Person of the Year award in 2012 by the St Albans District Chamber of Commerce.

Corr said: “I consider myself fortunate to work for such a forward looking business that has given me the opportunity to develop my skills. I’m proud to have played a part in helping Brayleys to develop into one of the best privately owned dealer groups in the UK for customer service and I look forward to continuing this journey.”

Managing director, Brayleys Cars, Paul Brayley said: “A business is only as good as the people it employs and Mark has consistently shown he’s got what it takes to be a success. With responsibility for a growing business across multiple sites, Mark’s recent promotion to Operations Director is a testament to his attitude, dedication and commercial talent. We wish him every success in his new role.”