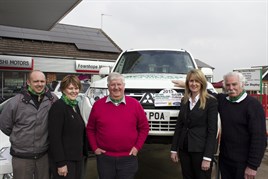 Parts manager Helen Taylor and master technician at the dealership on Kings Acre Road, Kevin Price, completed the Macmillan 4x4 Challenge in a Mitsubishi Shogun provided by the dealership, to raise money for the charity.

The pair tackled the 600-mile on- and off-road course, starting at Craven Arms in Shropshire. The 72 teams had to use their navigational skills to follow clues, which led them around the Welsh countryside to the end of the course in Cheshire.

Taylor, who lost her father to cancer, said: “Everyone who took part was there for one purpose and that was to raise as much money as possible for a great cause. It was exhausting but a thoroughly enjoyable experience.”

The Macmillan 4x4 Challenge has been going for 14 years and has raised more than £1.1million. The teams never know where they are going and in the past the route has taken them to Ireland and Scotland.

Organiser Selwyn Kendrick said: “The event has grown each year. The first time we did it we had eight teams and now we attract teams from all over Europe. We’re able to use Forestry Commission tracks and off-road routes that the people taking part would never normally get to drive on, so it’s really appealing to 4x4 drivers.”

To find out more about the event go to www.mac4x4.co.uk. To donate to the pair's fundraising go to www.justgiving.com/Helen-Taylor56/