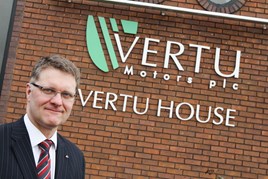 Chief executive Robert Forrester said there was no uncertainty whether the £12.8m takeover of SHG Holdings would go ahead.

“We got on very well with the vendor. We both knew the Volkswagen thing was out there, and the transaction reflected that,” he said.

“Do I have faith in Volkswagen Group to be a major manufacturer brand in the UK in five years time? Of course I do. There was no question of us not doing that acquisition, it’s a great business with great brands.”

Forrester said the South Hereford business, which will continue under its existing brand, is highly regarded and trusted by its customers and manufacturers, and its staff are very capable of managing the issue, as are the staff at Vertu’s other Volkswagen, Skoda and Seat sites.

“These challenges are set to face us, and I think the manufacturers actually handled them very well.

“There was no knee-jerk reaction, they took time and found out the facts, and I think it came as much as a shock to them in the UK as it did to us.

“There is now communication going out, websites, and the dealership network will be ready to receive these cars and to fix them.

“And actually there will be a short-term aftersales boost. There are two benefits to recalls – one the immediate aftersales income, and the second that you get an opportunity to speak to customers, which means we might sell some cars off the back of it.”

Forrester said Vertu, like most dealers representing the VW Group brands, has some affected car stock which has been put on hold, but these are “not massive numbers”.