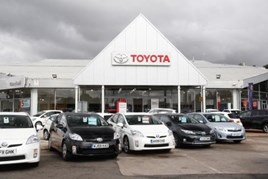 Marshall Motor Group has dispensed with its Toyota franchises in Peterborough and King’s Lynn as Steven Eagell moves in to expand its network.

Signs were exchanged at the two East Midlands sites this week after terms were agreed between the two groups, with Steven Eagell taking its Toyota concern to ten sites with completion of the deal.

While no official statement has yet been issued each party Steven Eagell have begun a recruitment drive for staff at the sites on Mallory Road, Peterborough, and Scania Way, Kings Lynn.

A recruitment day for staff in sales, service and parts, workshop and driving roles will be held at the Peterborough site on April 8th.

Gupta (pictured) said that the group was benefiting from the strong market and will continue to prosper, adding: “Our numbers were very strong.”

It gave the group an extension with one of its key franchise partners, Audi, as well as strengthening its geographic representation in the UK with sites in Wimbledon, Coulsdon, Bexley, Beckenham and Croydon.