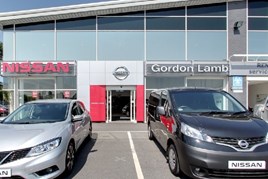 The £18.7m takeover of the family-run group also adds Vertu’s sixth Land Rover dealership, plus the Toyota site and additional Nissan and Skoda businesses, all in Chesterfield, and a Skoda outlet in Derby.

Gordon Lamb has traded in Derbyshire for more than 60 years, and recorded £85.8m turnover in 2015. Vertu said the acquisition further progresses its strategic goal of growing its range of franchises.

The transaction includes goodwill of £8.3m and includes freehold properties valued at £7.5m.

“The acquisition is an important development for the group and is in line with the strategy set out at the time of the capital raise in March 2016.

“The acquisition increases the number of outlets operated by the group in Derbyshire from 10 to 14 and hence further provides synergies around marketing and management.

“The acquisition of Nissan in Chesterfield, for example, creates a market area for Nissan including Derby, Ilkeston and Sheffield and brings the total number of Nissan outlets Vertu operates to 11.”

Vertu said the new additions will be earnings enhancing – in 2015 Gordon Lamb achieved adjusted EBITDA of £2.9m and adjusted PBT of £2.7m.

Robert Forrester, Vertu Motors chief executive, said: “Gordon Lamb is a much respected and well established business operating in Derbyshire, a core territory of ours. It is a business we have long admired and I am delighted to welcome them to the Vertu Group.  I see a very clear cultural, strategic and business fit.

“We are delighted and excited to commence representing Toyota under the Vertu Toyota brand adding yet another first class franchise to our business.”