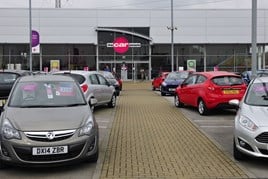 Both report to Dunkley, who in turn reports to Sytner chief executive Darren Edwards.

Edwards told AM the acquisition was in line with Sytner’s plans to diversify into used car operations as it sees good growth opportunities ahead in the UK’s used car market.

Prior to the latest takeover, Edwards had already given Dunkley a remit to identify new areas where the division could establish more car supermarkets, and it has bought two suitable properties in line with this ambition.

The Car People has four dealerships in South Yorkshire, West Yorkshire, Cheshire and Lancashire, while CarShop currently has five at Cardiff, Swindon, Northampton, Doncaster and Norwich.

Edwards said there are no plans to merge the two businesses under one trading brand, as each is its own established, successful brand and culture and loyal customer bases, and each has its own back-of-house processes and sources of stock. Sytner’s franchised businesses also operate under several different brands, including Graypaul, Guy Salmon and Sytner.

He added: “CarShop has been really successful. We’ve been delighted with the levels of profitability and professionalism of that business, so we started to research what else was around. Since the early days of Sytner when we grew, our strategy was to acquire businesses that were in good locations, well run and represent the right brands, and we’ve stood firm with that to build a business with nearly 150 franchises.”

He said Sytner was looking for more used car businesses that are high quality after buying CarShop, and The Car People, which turns over £225m annually, came to its notice. “It’s another fantastic business, with amazing locations, first class housekeeping and excellent management principles. It’s a different business to CarShop, but similar in many ways in terms of operator model, fixed price sales, no haggle, and a very transparent buying process and great website,” said Edwards.

Dunkley said The Car People business will add approximately 18,000 used car sales per year to the division and described the acquisition as "game changing".

He added: “The CarShop team and I are excited to be joining forces with The Car People who are a fantastic team with a great business that operates under a similar model to our own.

“There will no doubt be many opportunities to share best practice between both organisations over time.”

Prior to Sytner’s acquisitions, Car Shop and The Car People were the UK’s fourth and fifth largest used car dealers by turnover.

AM Poll
In five years' time what share of new car retail registrations will be accounted for by manufacturers' online direct sales channels? Please leave a comment.
Vote
View all
156