Car repair prices across the UK vary by up to 30% - but where are they most expensive? 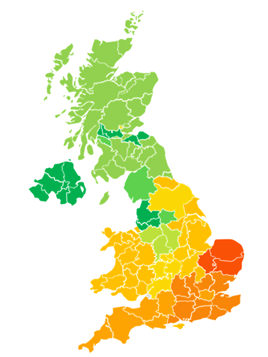 In a continuation of a series of insights from WhoCanBuyMyCar.com, marketing director Alex Rose looks at average repair prices in the UK  - and where is the most expensive.

“It’s a common assumption, Londoners pay more to maintain their cars than anyone else.

Surely all of that’s reflected on the bill presented to the customer.

Meanwhile, Londoners - and all city dwellers for that matter - must ponder whether they should have their car looked at the next time they pay a trip to see those in-laws in Norfolk or North Devon.

But London service/repair prices are only a few per cent off the national average, while the UK’s geographical extremities saw some of the highest pricing of all.

Every month, around 11,000 motorists will use WhoCanFixMyCar.com to find a great local garage or dealership. Drivers tell us what’s wrong - from an oil-change to a full-on restoration - and garages near them respond with a diagnosis and an estimated repair bill. When they’ve compared garage pricing, reviews and availability, the driver simply books in with their chosen outlet.

Over the years, we’ve built up an incredibly detailed picture of the UK motorist - the cars they drive, what goes wrong, and how they select a preferred garage or mechanic.

So, how did we analyse costs across the UK?

- We identified a ‘bucket’ of common repair types: Servicing (sometimes with MoT), common ‘under the bonnet’ work such as cambelt changes and brake and exhaust repairs

- We excluded outlying data to ensure we include only genuine quotes

- We weighted the repairs by likelihood. For example, cars are serviced more frequently than they require a new clutch.

- We divided the UK into regions and major cities to build up a detailed picture by key town and region. 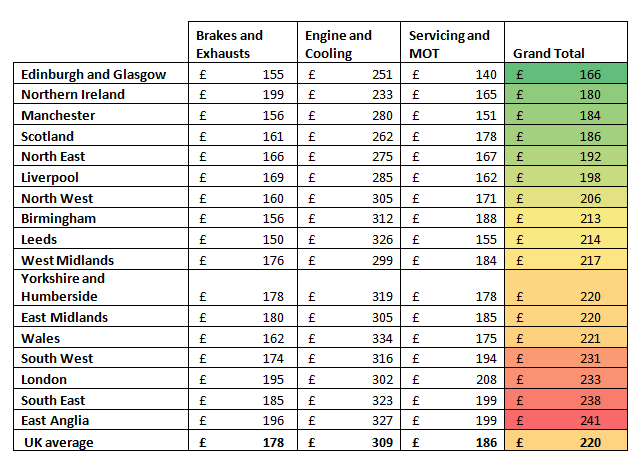 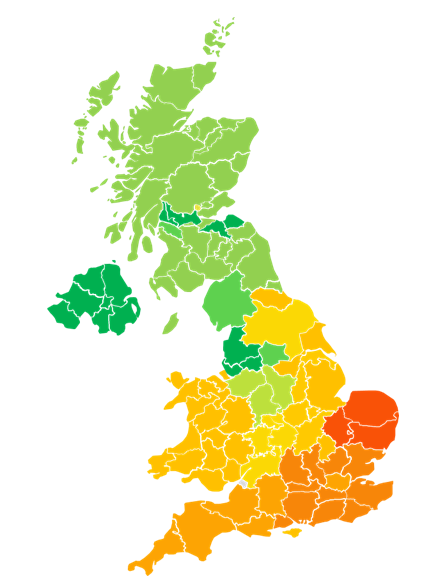 1.Prices DO vary by location, with some regions over 30% cheaper than the priciest areas. With our previous data suggesting that the average service/maintenance spend per vehicle is almost £600/year, that equates to a difference of over £2,300 spent across the average life of a car (13.2 years*).

2.It’s clear straight away that prices in the northern half of the UK are, on average, lower than in the south, with Manchester, Liverpool, the North East and Scotland all in varying shades of green….

3....but there’s more to it than that. Garages and mechanics sheltering in the hills and valleys of the UK’s rural idylls don’t, in fact, offer bargain-basement expertise. Indeed, their prices tend to be higher than those within nearby cities. Observe, for example, that London prices are below those of the South East as a whole, or the difference between Scotland’s two largest cities and the rest of the country.

What’s behind these trends?

It’s certainly true that wages and rents in the south of the country will be higher, overall, than those in the north and in Scotland.

However, this doesn’t explain the higher costs in rural areas as a whole.

Our theory comes in two parts:

- Price competition amongst urban garages may be higher. City-dwellers will be familiar with areas in which competitors sit cheek-by-jowl

- Urban garages may make less margin on each job, but compensate by simply churning through more work. Result? Their prices can sit a little lower than in surrounding areas.

Because WhoCanFixMyCar.com generates quotes for every car, every repair, across the country, we have something of a ‘birds-eye view’ of the servicing and repair market as a whole.

When it comes to the sort of repairs required, we can see, for example, that:

- Despite lower average driving speeds, Londoners are over twice as likely as the national average to request bodywork or dent repairs. What this says about their driving style, we decline to comment on. With all that time stuck in traffic, they’re also 2.5 times more likely to request in-car entertainment or audio-related work. And, perhaps by extension, they’re 50% more likely to request a windscreen or window replacement.

- Perhaps unsurprisingly, almost the exact opposite to the pattern can be seen in Scotland, particularly rural Scotland, where proportionally far less is spent on the above, with more emphasis on brakes, exhausts and tyres - doubtless a reflection on the number of miles covered.

- More than any other city or region, Liverpudlians have yet to embrace the concept of the mobile-mechanic - a fast-growing trend elsewhere - preferring a good, old-fashioned garage. They’re 70% less likely to ‘go mobile’ than the national average. That said, they do seem to enjoy a fast getaway from the traffic lights: they’re 30% more likely to request a replacement clutch than average.

- Drivers in Leeds clearly know their city like the back of their hand. Not only did they not request a single quote on a faulty navigation system, but they’re 70% more likely to request steering or suspension work - suggesting these guys aren’t hanging around on their morning commute.

- Savvy motorists in Wales and Yorkshire are either the most knowledgeable about their cars… or the least likely to plead ignorance. Compared to the national average, they’re over 30% less likely to use our ‘not sure what’s wrong’ category when reporting a fault. Which region claims the lowest level of mechanical knowledge? Why, Londoners, of course, who are a whopping 35% more likely to request a garage’s own diagnosis than any other area.

What do we drive? How does that vary across the country?

- Scots are the most likely owners of tough Suzukis and Subarus - more than double the national average to own either. They also have a voracious appetite for Vauxhalls - they’re 40% more popular on our site north of the border than elsewhere. And the least popular brand in the harsh climes of rural Scotland? Alfa Romeo.

- Birmingham-based drivers are more likely to have a Jaguar on the drive (and least likely to own a number of niche foreign brands, including Mitsubishi) than anyone else.

- Volvos are 50% more popular there than average in the South West and Wales. Certainly more so than in Manchester, where locals are over 50% less likely to be seen in one.

- In the North East Sunderland-built Nissans are 70% more popular than elsewhere.