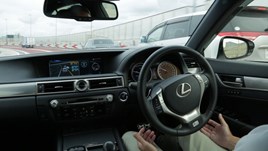 Toyota has confirmed it will launch autonomous vehicle technology on its passenger cars by 2020 after starting tests of its Highway Teammate concept.

The first trials have taken place on Tokyo’s Shuto Expressway, with a series of driving manoeuvres to test automated functions.

Highway Teammate is a modified Lexus GS, equipped for automated motorway driving all the way from the on-slip to the exit.

On-board systems monitor traffic conditions, make decisions and take actions such as merging on to or exiting the road, maintaining or changing lanes and keeping a set distance from other traffic.

The driver can activate the functions after passing through a motorway toll and entering a slip road.

Highway Teammate can pinpoint the car’s position using road map data; it also uses multiple external sensors to recognise nearby vehicles and hazards and selects routes and lanes according to the selected destination. It automatically operates the steering wheel, accelerator and brakes to achieve the appropriate speed and driving lines, in much the same way as a human drives a car.