Volkswagen, Audi, Škoda and Seat dealers are still seeking answers to questions surrounding the future viability of their businesses. They are tasked with helping to clean up the reputation of their carmaker partners as the emissions cheating scandal rumbles on. However, uncertainty remains over whether the cheating scandal will hit their sales of new and used cars in the short and medium term.

AM has learned that dealers with Volkswagen Group franchises are currently being approached about 2016 targets and terms, and a number have refused to sign contracts while there is such uncertainty about the impact of the scandal. Dealers AM has spoken to said footfall at their Volkswagen sites had dropped by between 10% and 15% since the scandal broke.

However, Willis said there is “some risk” this target will be missed. He acknowledged that the timescale was dependent on the network being able to cope with the repairs that would need to be carried out. “There is some risk involved in that, but the goal is to get vehicles fixed by the end of 2016,” he said.

“We couldn’t exist without our retailers, they are the backbone of our business and it’s really important that we look after and support them” Paul Willis, managing director, VW Group UK

“We couldn’t exist without our retailers, they are the backbone of our business and it’s really important that we look after and support them. They are at the forefront of the pressure and questions from customers so it’s absolutely imperative that we work and help them,” Willis said.

AM has used current franchised network status data from AMi, our dealer database, to highlight what the workload will mean for each network in addition to their existing service, maintenance and repair jobs.

Audi’s network will be under the most pressure, with every dealership having to fix an average of 67 affected cars a week. With its larger network, Volkswagen’s dealerships will each gain 40 jobs a week.

Škoda’s network is still undergoing an element of restructuring and dealership refurbishments. Its dealerships will gain an extra 19.5 jobs a week. Seat is the least affected, with 11.5 extra jobs a week per site, although some of its workshops already have capacity issues.

As AM went to press, Volkswagen Group still had not announced a definitive solution capable of remedying the emissions problem while not affecting fuel consumption and performance. Willis said about 700,000 of the 1.2 million cars involved should only require a software fix. However, more than 400,000 of the rest will also require new fuel injectors.

The franchised networks have not yet been told how they will be paid for the recall work in 2016. One franchisee told AM: “If they think they’re just going to pay us warranty rate for this, they’ll need to think again. There’s a capacity issue in the network, and if this commitment to the recalls eats into our retail hours available we’ll expect suitable compensation.

“I think the dealers have a lot of bargaining power in this. Why should we be affected financially for what they have done?”

VW Group UK has removed dealer stocking charges for consignment cars affected and has guaranteed CSI payments in the short term. However, the dealer networks are still in the dark as to longer-term support.

“The communication is okay, but they need to do considerably more of it. The thing is they can’t, because everything has to be controlled by headquarters, and they’re so scared about liability and lawsuits,” said one franchisee.

“The uncertainty for the dealers is that the damage done to the brands is not something we can measure.”

With diesel power particularly popular in the company car sector, the reactions of fleets will be a concern.

“Do I have faith in Volkswagen Group to be a major manufacturer brand in the UK in five years’ time? Of course”Robert Forrester, chief executive, Vertu Motors

Some leasing companies are adopting a wait-and-see attitude, while others have said privately that they’re considering removing models from their choice lists. A Sewells survey of fleets found one in four reconsidering their VW Group diesel orders.

Company car drivers may also need assurance that the impact on their working week will be minimised. Fortunately, the emissions issue does not have the immediate urgency of a safety recall, so it is possible that many of the affected 0-3 year-old cars could be remedied during the annual service booking.

The UK’s Department for Transport has confirmed that it will not follow Germany in issuing a mandatory recall for cars affected. That means VW Group UK will be able to stick to its voluntary plans, rather than rush the callback and put extra pressure on its dealers.

“We will continue to put pressure on VW to make sure this happens as quickly as possible, so that people in the UK can have these problems fixed,” said the DfT.

At Vertu Motors, which bought more Volkswagen and Audi sites after VW Group admitted cheating, chief executive Robert Forrester said dealers can only manage the here and now. He acknowledged that it brings “challenges”, but added: “Do I have faith in Volkswagen Group to be a major manufacturer brand in the UK in five years’ time? Of course I do. There was no question of us not doing that acquisition. It’s a great business with great brands.” 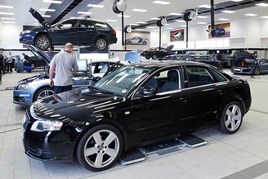 “Actually, there will be a short-term aftersales boost. There are two benefits to recalls – one the immediate aftersales income, and the second that you get an opportunity to speak to customers, which means we might sell some cars off the back of it.”

However, one source said owner-drivers who have their own money invested in the franchises have real worries.

Concern remains over the long-term impact of the scandal on consumers’ attitudes to Volkswagen, Audi, Škoda and Seat cars, both new and used. At Glass’s, head of valuations Rupert Pontin said Volkswagen values have dipped in comparison with the rest of the market even considering the time of year. Its diesels were tracking 3% behind the market average at the end of September. “But at this point it is unclear whether this will be a blip or continue to be reality,” said Pontin.

“It really is the consumer that will decide. If happy, they will continue to buy Volkswagen Group products and the trade will therefore return to paying strong money for the Volkswagen group cars in the wholesale market.”

He said it is worth remembering that Volkswagen produces well built, reliable cars: “In Europe and UK, despite the ever increasing volume, Volkswagen retains a semi-premium position and Audi a premium brand accolade for the time being.”

However, a YouGov BrandIndex study of Volkswagen brand health at the end of September found that ‘brand-buzz’ had dropped from +5 to -13.

“It is basically a trust problem now. VW evidently lied to customers and the Government, so they are now not seen as a trustworthy company. This is compounded by the fact that their main selling point was strong, economical and environmentally friendly diesel engines.

“Once you take that out of the equation, VW has lost much of its appeal,” said one independent marketing analyst.

How the Volkswagen emissions scandal unfolded in the UK

Following global media revelations of devices fitted to cars to cheat NOx emissions tests in the USA, VW Group UK was alerted to a “potential problem with diesel engines” by its head office in Germany on September 22.

On September 30, it gained the VIN numbers of the UK cars affected and put sales of about 4,000 vehicles still in stock on hold.

It has identified 1.2 million UK vehicles from 60 model lines across its brands.

In the UK, 400,000 vehicles fitted with the 1.6TDI EA189 engine are expected to need a software upgrade plus additional corrective work, including new fuel injectors.

The remaining 700,000+ vehicles with 2.0TDI and 1.2TDI engines can be fixed by software updates alone, according to Volkswagen.

Each brand has been running websites with a VIN look-up tool since October 5, and letters are being sent from VW Group UK managing director Paul Willis to those owners with affected cars who are still known to the company.

The company’s engineers are still developing the solution, but it has promised that fuel economy will not be affected.