Few things in life are as reliable as a Volkswagen scandal 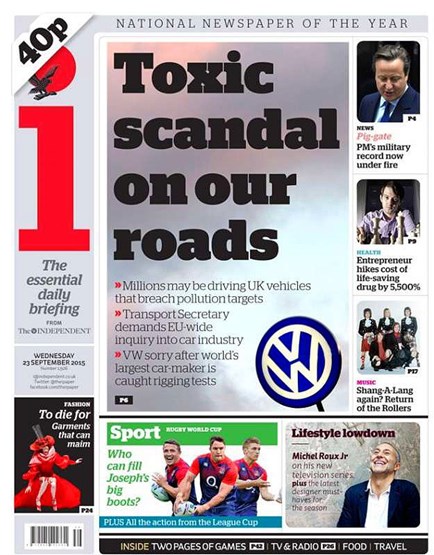 The reaction of the car industry to the current Volkswagen revelations has been one of shock and initial disbelief – the head of the Scandinavian car industry association said, “My first reaction – do I read right - is it really true?”

The scandal was initially so hard to believe because it strikes at two of Germany’s best-known characteristics – engineering excellence and environmental awareness (no other country has spent as much money on renewable energy).

However, taking the longer view, we can see that Volkswagen is the most scandal-prone major car company in the world – and must be pretty high up the list of repeat offenders across all industries.

Over the past 20 years, Volkswagen has been embroiled in three other major imbroglios:

2008: The “perks and prostitutes” affair. It emerged that Volkswagen had been paying for lavish parties and prostitutes for union leaders from 1995 to 2005, apparently to encourage their co-operation in restructuring working practices.

The head of the union, Klaus Volkert, was convicted of 48 counts of corruption involving taking more than £1 million in bribes, including £400,000 to a former Brazilian lover.

Two Volkswagen executives, including Peter Hartz, the head of personnel, were given suspended sentences. The court cases gave a very unusual view of corporate life, as witnesses made lurid allegations about what passed for normal at Volkswagen, including that its medical department handed out Viagra tablets to union personnel before trips to brothels.

2005: Volkswagen, apparently anxious that hedge funds saw it as a fat and lazy target, encouraged Porsche to take a “friendly” minority shareholding (Ferdinand Piech, former boss of Volkswagen is also the grandson of Ferdinand Porsche).

However, the sight of Volkswagen, Porsche and the State of Lower Saxony apparently acting in concert caused Hermes, a pension fund manager, to write a complaint to Piech, as “concert parties” are subject to very strict rules (they can be used by big shareholders to undermine the rights of small ones). In the light of what happened next, the concern about a concert party going too far seems almost charmingly idealistic.

Porsche got ideas above its station and infamously tried to buy Volkswagen outright. It naively thought that owning a majority of the shares would be enough. Volkswagen said the 20% blocking minority owned by the State of Lower Saxony meant Porsche could not take control no matter how many shares it owned.

The European Court of Justice ruled against Volkswagen, but the German government managed to spin out the case until Porsche ran out of cash, and Volkswagen turned around and bought Porsche instead. Meanwhile, ex-Porsche executives have subsequently spent years being accused of deceiving investors in Volkswagen – the court case is still rumbling on.

Hermes actually questioned Piech at a board meeting during the battle, saying that “bad operating performance goes along with bad corporate governance”, but Piech responded as would an emperor to an impertinent serf. His answer to another question asking him to resign was, “I will respond to you on my plans for my life in due course”.

As if to emphasise who was boss, in 2012 Piech appointed his wife, a former kindergarten teacher, to the board.

1996: It might seem strange today, but in the early 1990s Volkswagen was very worried that GM Europe had a big cost advantage, partly thanks to better purchasing skills.

The head of GM purchasing, José Ignacio López de Arriortúa, had made his name slashing costs in Europe before being promoted to the purchasing boss for the whole of GM. Lopez, who saw purchasing as almost a religious calling (he called his staff “warriors” who had to eat a healthy diet devised by Lopez himself) was personally head-hunted from General Motors by Ferdinand Piech.

It turned out that Lopez had not only brought his experience, but also 70 cartons of top-secret GM documents. In 1997, Volkswagen agreed to pay GM $100m in damages and buy $1 billion worth of parts from GM. In return, all charges against Volkswagen were dropped.

Nor were these cases a matter of Volkswagen just going through a bad patch: in the 1980s, Volkswagen had to make a provision of $259m for a currency exchange fraud when currency speculators used Volkswagen accounts, and in the 1970s it was fined $120,000 after the US Environmental Protection Agency found it had... installed a mechanism to shut down its cars’ anti-pollution systems.

"The dealers have a lot of bargaining power in this. Why should we be affected financially for what they have done?"Read 'Dealers fear the fallout of VW scandal' here

So what is unique about Volkswagen that leads to serial (and sometimes parallel) scandals? An important clue can be found in the Volkswagen-Porsche takeover tussle. It is not possible for an outsider to buy Volkswagen – even now, a change of ownership requires 80% approval, which means every shareholder bar the State of Lower Saxony has to agree.

That is quite impossible as three close-knit groups – the Piech and Porsche families plus the State of Lower Saxony control approximately 70% of the shares. Another 17% is held by Qatar Investment Authority, which is hardly renowned for being an activist shareholder.

While the unique “Volkswagen law” does not cause the virus of corruption, it certainly creates very fertile conditions.

Volkswagen is very large, proof against take-over, partly state-owned and has a board of directors with just one fully independent member. Those are not conditions conducive to a transparent management culture.

The only organisation that can afford a wry smile about the current situation is Hermes. After years of complaining, it pulled out of Volkswagen in early 2015 because Volkswagen kept dismissing its concerns about corporate governance – possibly the most lucrative case of “I told you so” in corporate history.