Car manufacturers achieve highest production volumes for a decade in 2015 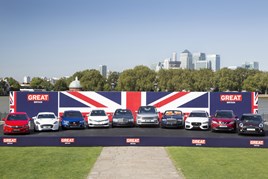 British manufacturers saw their highest production total for a decade in 2015, with 1,595,697 vehicles rolling off the production lines.

Figures released by SMMT has revealed that last year saw production rise 3.9% on 2014 to overtake pre-recession levels for the first time.1

Mike Hawes, SMMT Chief Executive, said: “Achieving these hard fought for results is down to vital investment in the sector, world class engineering and a committed and skilled UK workforce – one of the most productive in the world.”

Challenges were experienced in some global markets such as China, where demand fell by 37.5%, and Russia, where export volumes declined 69.4%.

However, the economic recovery in Europe, the UK’s biggest trading partner, boosted demand for UK-built cars considerably by 11.3% in 2015. The region now accounts for 57.5% of all UK car exports.

Appetite for British-built cars grew significantly in other key and emerging regions, demonstrating the strength and diversity of UK manufacturing and product.

In the US, demand rose by more than a quarter (26.5%), making it the UK’s biggest trading destination outside the EU, ahead of China.

British consumer and business demand for British-made cars also contributed to last year’s success, with the home car market rising 8.1% on the previous year. One-in-seven new cars registered in the UK in 2015 was made in Britain.

He added: “Europe is our biggest trading partner and the UK’s membership of the European Union is vital for the automotive sector in order to secure future growth and jobs.”