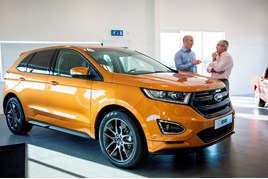 Ford bosses believe the new Edge SUV will have the same positive impact in the UK as the S-Max did, and has promised a range of highly competitive PCPs aimed at delivering in excess of 6000 annual sales.

Ahead of its official unveiling at next week's Geneva Motor Show, Ford showed the Edge display model — which will take pride of place on its Swiss stand — at an event at Silverstone, writes Jim McGill.

Paul Baynes, medium and large car product manager, Ford of Britain, explained the significance of the Edge to the UK market, and how the company is confident it can claim conquest sales from established premium brands.

"Edge joins the Ford SUV family, where we currently offer the EcoSport and Kuga," Baynes explained. "Last year Ford was the biggest-growing SUV manufacturer in the UK year-on-year. So we have momentum.

"In the last four years we've tripled our volume of Kuga, selling 32,500 units last year, so there's definitely demand for Ford SUVs in the UK. That's why it made sense to bring in the larger car, Edge."

When it enters UK dealerships in May, Edge (pictured) - which is longer than a VW Touareg, and offers significant space in the rear and luggage area - will be available only with the 2.0TDCI bi-turbodiesel powerplant, but with two levels of output, 180PS and 210PS, both returning 44.1mpg and emitting 149g/km CO2.

While the 180PS gets a six-speed manual gearbox, the larger unit is mated to a six-speed auto. Edge will only be available with four-wheel drive.

Three trim levels will be offered, Zetec, Titanium and Sport, with prices starting at £29,995 for the entry level Zetec. The Titanium adds £2250; another £2250 for the Sport series, with a Lux pack available for an additional £2000.

Ford predicts the 210PS Sport — which gets 20in dark alloys, dark grille, full bodykit, plus additional flared sculpting at the rear — will be the biggest-seller, accounting for at least 50% of UK sales.

"The silhouette of Edge is sporty. That's important because people need a stylish, expressive car, which is why people are moving into this segment," Baynes continued. "That's why we think Edge is going to do very well.

"We think most sales are going to be retail, and into the smaller end of fleet; the SME range where people are leasing the car with their own money through allowance schemes and such like.

"People are buying the car because it looks good. We've proved there are certain segments of the market where having a perceived premium German brand is not fundamental.

"When we brought S-Max in, suddenly people took the view, 'that's new, that's something different, and it's very good', and we drew customers into the brand that way. We believe Edge will have a similar affect.

"Edge is built on the same platform as the S-Max, and the underpinnings are very close to S-Max, so we think that will draw customers to the Ford brand.

"The majority of people nowadays are buying their car on a PCP, and we've got an absolutely stonking residual value on the car from the industry leaders: 55% at three years and 30,000 miles

"We believe we have Edge specced right; it's priced right; and our sales distribution is spot-on. We see the volume in retail, and that's why we believe Edge will be a success."