Volkswagen registered the only negative change among the top 10 best-selling brands in January as the market marked the 29th consecutive month of year-on-year growth in European new car registrations.

A total of 1.09 million units were registered.

The month saw a 6.1% increase in volume compared with January 2015, and the region’s highest January sales in four years.

The results were boosted by strong growth in two of the big-five European markets – Italy and Spain - as well as Ireland, Czech Republic, Switzerland and Finland.

However, the Netherlands, Belgium, Greece, Croatia and Latvia all experienced a downturn in sales.

Volkswagen remained the best-selling brand for the month with 128,500 units sold, though it experienced a loss of market share, falling from 12.9% in January 2015 to 11.8% last month.

But sister brand Audi increased its volume by 14.2%, the highest rise in the top 10. 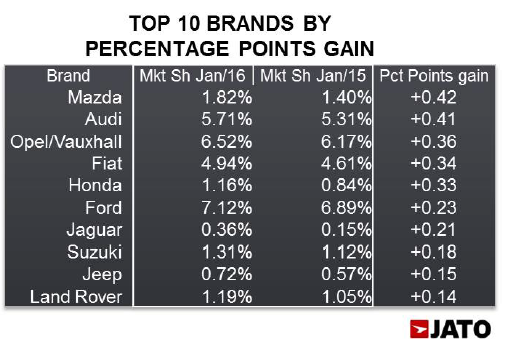 The Volkswagen Golf was the top model, thanks in particular to its strong position in Germany and Italy, though it also performed well in other large and mid-size markets.

However, Opel/Vauxhall experienced a 50% gain in year-on-year growth with its new-generation Astra, a direct rival to the Golf, with sales totalling 16,900 units.

The Golf was followed by the usual three best-selling subcompacts – Volkswagen’s Polo, Ford’s Fiesta and Renault’s Clio, with the Polo growing 4.9% to almost 25,000 units.

The volume falls recorded by the Fiesta and Clio allowed the Peugeot 208 to gain ground on its competition, posting sales of 19,200 units, an increase of 19.4% year-on-year.

It was also a challenging start to the year for the Nissan Qashqai, as its registrations fell by almost 1%.

Outside the top 10, the Volkswagen Passat and Peugeot 308 experienced relatively moderate growth, while the Renault Captur posting a small percentage decrease (1.6%).

The Captur’s rival, the Opel/Vauxhall Mokka, had a positive month, occupying 20th position thanks to an 8.1% increase in volume.

The performance of the Fiat 500 also declined.

Registrations of the Mercedes C-Class fell by 14% following a slowdown in all the big-five European markets.

Its largest market was Ireland, which contributed 20% of its European sales.

The Renault Kadjar was another big winner with a 0.75% rise in share, achieved through sales of almost 8,200 units.

It was followed by the Fiat 500X, Suzuki Vitara, Opel/Vauxhall Karl/Viva and the Mercedes GLC, all with more than 0.5% gains.

“After two months of double-digit growth, the European new car market slowed down in January.

“Volkswagen remained top but lost ground to its main rivals, who benefitted from the success of their SUVs and new models. January’s figures suggest that the current momentum behind SUVs will continue, further establishing the segment’s importance,” said Felipe Munoz, global automotive analyst at JATO Dynamics.