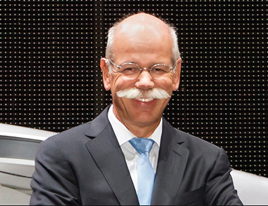 Motoring in the future will be ruled by self-driving cars.

“We have been pursuing the vision of accident-free driving for quite some time and we are now making big steps towards the realisation of that objective,” said Dieter Zetsche (pictured), head of Mercedes-Benz Cars.

In a feature on the website of AM sister title Fleet News, he said: “The ultimate luxury is of time and of space, so in a dense traffic environment you have your own space where you can listen to music or whatever.

“If, for whatever reason, you’re not interested in doing the driving job yourself, you can use this time for whatever you want to do. And at the same time you get from A to B. That is a different kind of luxury.”

He likens this idea to owning a boat, which some sail themselves, while “others have a crew, enjoy the sun and relax”.

While autonomous driving has the twin aims of eradicating accidents altogether while giving us the gift of time, it’s some way away yet.

Zetsche won’t put a time frame on it, but Volvo has an aim for a ‘crash-free’ autonomous car by 2020.

The problem is not with the technology itself, however, but with the myriad legislative and safety issues surrounding taking our hands off the wheel.

The latest generation Drive Pilot system fitted to the E-Class is a case in point.

It will keep the car in lane on a motorway, apply the brakes to a complete standstill if need be, and change lanes itself when the indicators are applied.

But there’s a question about the legality of the last of those features in the UK, so it’s not being offered here for the time being.

“We have to develop together to understand how fast we can move and how far,” said Zetsche.

“The moment a car is autonomous and you say you’re allowed to go to the rear seat, then you have a totally different situation and you have to prove that your system is absolutely state of the art.

“We have to do a lot of work before we will understand how to do that.”

Mercedes-Benz has proved that it can make a car drive itself (as have Volvo and Tesla), but even more complex is initiating the framework in which these cars can operate.

To avoid collisions, autonomous cars need to ‘talk’ to each other, and that requires incredibly sophisticated communication systems and detailed exchange of data.

To this end, Mercedes-Benz partnered with BMW and Audi last year and spent £2 billion buying Nokia’s Here division – in effect, buying the proprietary software that runs the navigation systems of each.

Here is accurate and operates in real time, so cars can warn surrounding vehicles of hazards and accidents, as well as, of course, road and traffic information.

This, though, gives rise to Orwellian concerns as cars become ‘connected’ and car companies receive vast swathes of information on their customers. This is clearly something of a grey area for Zetsche.

“The car doesn’t end with the hardware, it’s more and more becoming part of our mobility system, with services around it,” he said.

“I don’t expect the regulators to just let us do anything we want to do.

“I think we have to learn together what makes sense. Where is the regulator just blocking potential developments with benefit to the customer? And where is the lawmaker protecting the customer from irresponsible things?”

It could see dramatic changes in the nature of the car itself – driverless cars seen as a shared commodity rather than an ownership proposition, taxed in a different way, and relegated to simply a ‘box’ that’s no longer a perk, as such.

Zetsche seems unfazed by the potential death of the traditional car.

“If any technology adds value to the customer so that they prefer the new offer, it would be pretty dumb to try and fight it.

“Nobody can predict how that will develop, but sharing will play a bigger role than it has to-date.

“Sharing doesn’t mean that these cars are all ‘stupid boxes’, where you feel like you’re on a metro, but you might like sharing much more than you do today.”

But there’s no need to worry about the changing face of the automobile just yet – if the NOx emissions scandal can’t hasten the move towards electric cars, there’s surely plenty of life left in the traditional car buying model: “We have not seen any reaction ,” said Zetsche.

“The take rates of diesel are exactly the same as they were before.

“We are investing in hybrids, plug-in hybrids and full electric cars, but there isn’t too much appetite for these products. Low fuel prices probably have a stronger impact on the decisions of customers in this regard.”