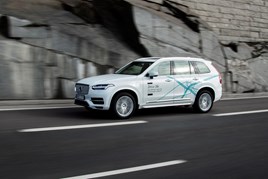 Volvo is to kick-start a drive towards technology that promises to reduce collisions and congestion by starting the UK's most ambitious autonomous driving trial to date.

The Swedish brand – synonymous with automotive safety since it invented the three-point seatbelt in 1959 – is pioneering the development of autonomous driving (AD) systems globally as part of its commitment that no one will be seriously injured or killed in a new Volvo by the year 2020.

Unlike other AD trials the Volvo initiative, which will be called 'Drive Me London' and is set to get underway early next year, will see real families driving AD cars on public roads.

Volvo will source its data from these everyday users and use this data to develop AD cars that are suitable for real-world driving conditions.

Thatcham Research will be providing the technical data analysis and any professional test drivers needed as part of the trial.

"The sooner AD cars are on the roads, the sooner lives will start being saved."

A limited number of semi-autonomous driving cars will be introduced to UK roads in 2017 as part of the Drive Me London scheme, with up to 100 AD cars expected to be in place by the end of 2018, making it the largest and most extensive AD testing programme on Britain's streets.

Mr Samuelsson is set to present Volvo’s plans at a seminar sponsored by Volvo and Thatcham, the insurance industry's research organisation, in London on May 3rd entitled 'A Future with Autonomous Driving Cars – Implications for the Insurance Industry'.

Volvo said that independent research has revealed that AD has the potential to reduce the number of car accidents significantly, in some cases by up to 30%.

Up to 90 per cent of all accidents are presently caused by driver error or distraction, something that should largely disappear with AD cars.