Volvo dealers have 'a lot to look forward to', says UK product manager 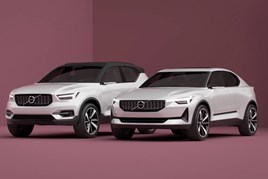 Volvo’s path to 60,000 annual sales in the UK will lead to greater throughput for its existing dealer network, but new retail models could harness online possibilities to streamline future sales.

As the burgeoning Swedish brand unveiled its S90 large saloon and V90 estate models to the UK motoring press this week, its sales and pricing manager for the UK, Iain Howat, said that the future looks bright for the brand’s 106 franchised dealers.

This year the brand is targeting about 48,000 sales and Howat said that the existing network will sustain the rising numbers. He said: “There is no need for the existing network to grow. We’re happy with our geographic spread. Some sites might need to move or grow to cope with the extra throughput, but we don’t see the number of retailers rising.

“This is a great period in the history of Volvo. Five or six years ago people were writing us off. Now we are a manufacturer on the move and the franchised dealers have a lot to look forward to.”

Speaking to AM this week, Howat said that the new models were opening Volvo up to a new audience of premium car customers.

He said that residual values of 40% and 41% for the S90 and V90 models in their key Momentum trim level – the lower in a two-tier line-up which also includes a Inscription premium model – were a key “premium value indicator” which now put Volvo on par with its German rivals.

He added: “The S90 and V90 are vehicles that will compete on a level playing field with the likes of BMW, Audi and Mercedes in every area.

“After the popularity of the XC90 these are models that can propel us further on the road to that 60,000 figure.”

Howat said that, which the financial backing of Chinese owners Geely, Volvo had developed a spirit for innovation and maintained a focus on core values which allowed it “great agility and flexibility” in the market.

Among the features pioneered in-house by Volvo in recent times are PowerPulse – a compressor-fed system which spools up turbochargers to improve throttle response – and the PilotAssist system which is the brand’s next step towards autonomous driving, offering adaptive cruise control and lane keep assist.

And Howat revealed that two all-new models were likely to fill gaps in what Volvo sees as a nine-model line-up which will propel it to 60,000 sales.

The newcomers are likely to be S40 and XC40 derivatives already showcased in the brands 40.1 and 40.2 concept vehicles.

He said: “In those concepts we see what may become the S40 in what we call a notchback form – not really a hatchback or a small saloon – and the XC40 a more familiar crossover style vehicle.

“The potential for an XC40 is huge in the UK at the moment and this is a vehicle which could really see us push towards our sales goals.”

Howat said that Volvo was exploring online retail possibilities – to be fed through the dealer network like the model operated by BMW Retail Online – to support traditional sales methods.

The said that the sale of almost 2,000 Launch Edition XC90s within 47 hours of online booking forms being opened online last year was proof that people would now consider buying a vehicle online.

He also intimated that pop-up shop marketing activities could become a more common part of the brand’s sales activities following the success of events at Reading’s Oracle and Glasgow’s Silverburn shopping centres in April.

Howat said: “Without doubt, the sales landscape is changing and we have to respond to that.

“Online sales are something that Volvo is exploring and is likely to launch within the next two years.

“I think it is something that will see orders placed to be channelled through the existing dealer network.

“The automotive sector is very traditional, but the internet has changed everything and we have to be well placed to exploit that.”