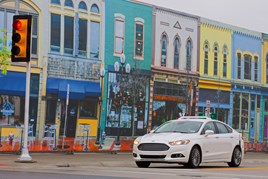 Ford has developed its involvement in four new start-up companies and doubled the size of its Silicon Valley-based development team as it targets fully-autonomous ride-sharing by 2021.

The brand aims to be a market leader in new mobility solutions and has announced its plans to create a high-volume, fully autonomous vehicle within five years.

Mark Fields, Ford president and chief executive, said: “The next decade will be defined by automation of the automobile, and we see autonomous vehicles as having as significant an impact on society as Ford's moving assembly line did 100 years ago.

"We're dedicated to putting on the road an autonomous vehicle that can improve safety and solve social and environmental challenges for millions of people – not just those who can afford luxury vehicles."

Ford's first fully autonomous vehicle will be a Society of Automotive Engineers-rated level 4-capable vehicle, without a steering wheel or accelerator and brake pedals

Its plans are being spearheaded by development teams in the US who will, this year, triple the size of the brand’s autonomous vehicle test fleet to be the largest test fleet – bringing around 30 self-driving vehicles to highways across the Atlantic.