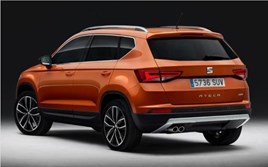 Seat’s launch of the Ateca this month and the smaller SUV in 2017 will give the brand its most comprehensive line-up yet – and push fleet business to record levels.

The manufacturer has seen sales in fleet grow for the past three years, largely due to the success of Leon, and it expects this trend to continue.

Peter McDonald, head of fleet and business sales at Seat UK, told AM sister-title Fleet News: “We expect to maintain that to the year end. These volumes are at a record level now, and the good news for us is this is before we see the impact of Ateca.”

Seat, he said, had received hundreds of orders from fleet and retail customers for Ateca even before people could drive it.

As well as its compact SUV, Seat is due to launch a small Ibiza-based SUV midway through next year, and these two models will increase its coverage of the market by vehicle type from 50% to 75%.

“This will be the most comprehensive line-up Seat has had in terms of segments,” said McDonald.

“We have been dependent on Leon – and Leon is great – but we know that the fleet marketplace requires more.”

He would not reveal Seat’s specific growth ambitions for the next 18 months, but said: “We want to continue growing; we want to launch Ateca properly and take a 3-4% sector share with that.”

That would make it the manufacturer’s second best-selling fleet model behind Leon, which is due to undergo a mid-life refresh later this year. Seat will also launch a new Ibiza next year.

McDonald expects sales of all Seat models to benefit from Ateca, as he anticipates the SUV to win conquest sales from other brands and sectors, as well as attract new buyers to the brand.

He said: “We saw some work that was done when Nissan Qashqai launched and the majority of customers were a combination of two things: people who have migrated up from the Volkswagen Golf, so a typical hatch body style, and the other was BMW 3 Series down.

“I think Ateca will help us grow more Leon customers because we can sell a bigger portfolio of models.”