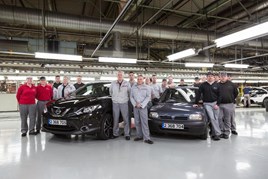 Nissan has awarded the contract to build the next generation Qashqai to its Sunderland plant, despite fears of trade volatility due to Brexit.

The plant has also been awarded a deal to build the X-Trail, which is currently manufactured in Japan. The deal means the plant retains the Qashqai, which it has built for global markets since its launch in 2007. More than two million Qashqai’s have been built in Sunderland in less than 10 years.

The plant currently builds Nissan's Qashqai, Juke, Leaf and Note, as well as the Infiniti Q30 and QX30 models.

80% of production from Sunderland is exported to over 130 international markets.

“I am pleased to announce that Nissan will continue to invest in Sunderland. Our employees there continue to make the plant a globally competitive powerhouse, producing high-quality, high-value products every day,” said Carlos Ghosn, chairman and CEO of Nissan.

“The support and assurances of the U.K. government enabled us to decide that the next-generation Qashqai and X-Trail will be produced at Sunderland. I welcome British Prime Minister Theresa May’s commitment to the automotive industry in Britain and to the development of an overall industrial strategy.”

Nissan’s Sunderland plant opened in 1986 and has produced almost 9 million cars since. One in three British cars are produced in Sunderland.

"To secure this position, however, we need government to provide public assurance to investors that our advantages will be maintained – namely, a competitive business environment, the ability to recruit talent from abroad and the continuation of all the benefits of the single market as we leave the EU.”